A friend of mine had a colonoscopy recently.

“Did they find anything?” I asked him.

“They found a couple of polyps,” he said, “but they weren’t those cancerous ones.”

“What do you mean, they weren’t those cancerous ones?” I asked, being a pathologist, after all. “Were they hyperplastic or adenomatous?”

Naturally, his eyes glazed over and he just shrugged.

“What did your doctor tell you they were?” I persisted.

“He just said they weren’t cancerous.”

“When did he say you should have another colonoscopy?”

OK. What we have here is a failure to communicate. The vast majority of polyps aren’t cancerous. But there are some that can become cancerous, and some that never do, no matter how big they get. 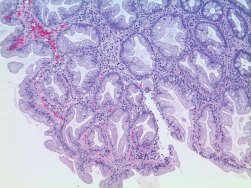 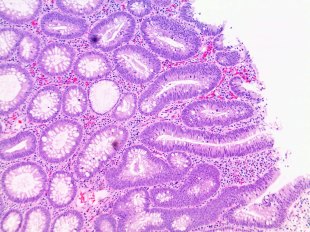 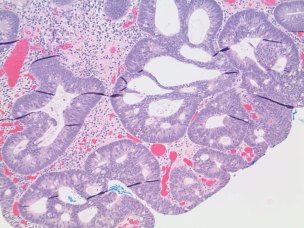 The first change in an adenomatous polyp is called high-grade dysplasia (above). It’s a premalignant change. If a polyp can be removed, and the dysplastic area is completely surrounded by benign colonic mucosa, that’s all that needs to be done.

But sometimes the dysplastic mucosa covers the stalk of the polyp.

Sometimes the dysplastic changes invade into the stalk of the polyp. That’s cancer.

When that happens, the patient must have a colon resection to be sure all the malignant tissue is gone, and that none of the cancer has involved lymph nodes. Usually a cancer that early hasn’t involved anything but the area right around the polyp.

What about my friend?

Well, I guess he’ll have to wait until his next colonoscopy, two years from now.

For right now, he doesn’t have cancer, and I guess that’s all he needs to know